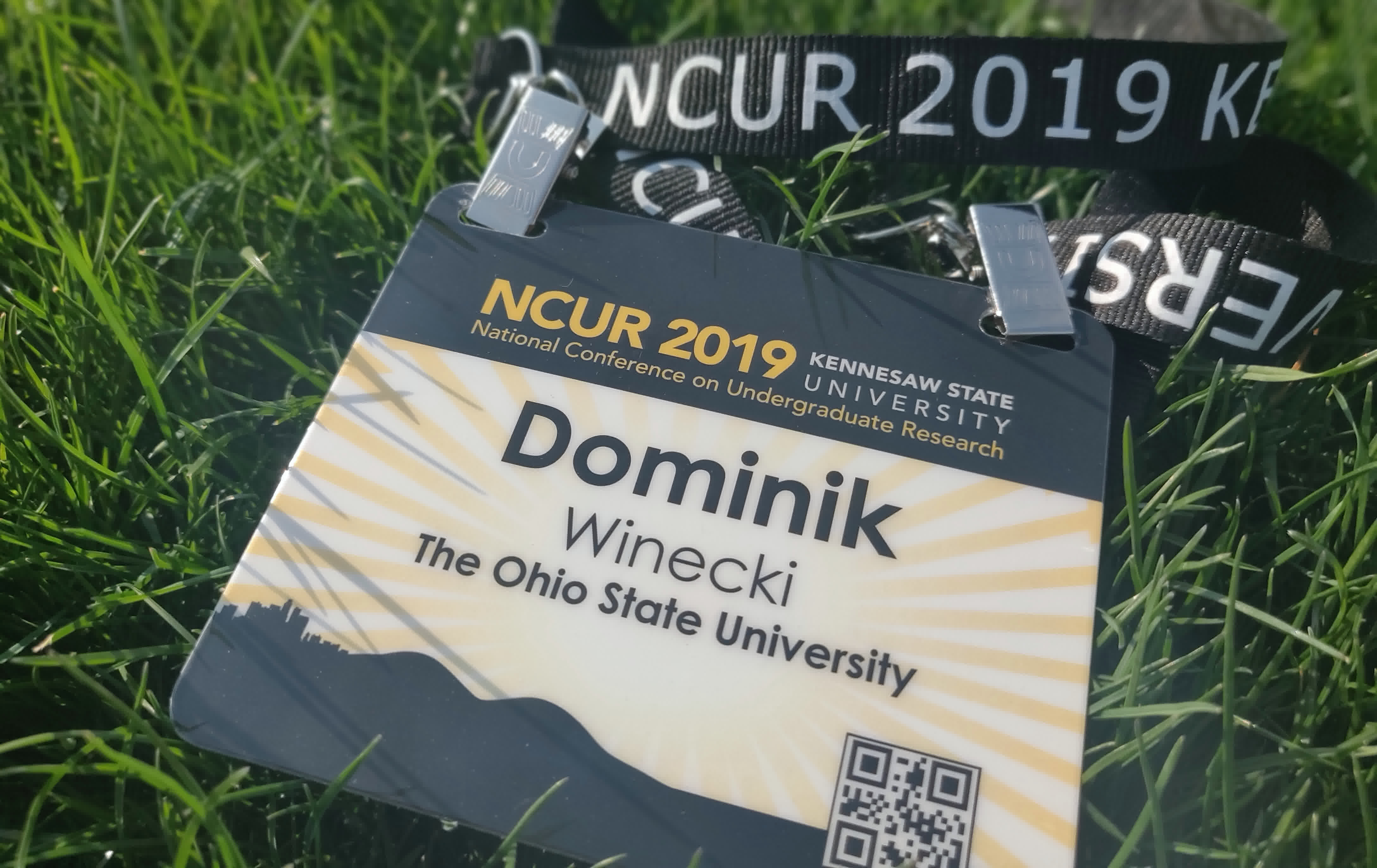 I’m thrilled that this year I had the opportunity to present my research at the National Conference on Undergraduate Research at Kennesaw State University.

NCUR19 kicked off with a plenary session featuring a keynote on whale sharks. Thanks to the Georgia Aquarium, which has the only captive whale sharks in the US, Atlanta is the front-runner on their research. Even though a handful are kept in captivity, there is still very little known about them, like how deep they go on their deep-ocean dives. That last question may soon be answered since a custom tag has been deployed that won’t max out at 2000m. I didn’t know much about whale sharks going into this, but I left with my calendar marked for the day that tracking tag is programmed to come off of one.

Following the plenary session was the start of the poster presentations. There are at least a hundred posters per session so I can only mention some of the (mostly computer science) highlights that I found memorable:

Autonomous Payload Return Vehicle: When weather balloons drop their payloads with traditional parachutes they have a tendency to land in the worst places. This project uses a parafoil controlled with servos to steer the payload to a target. Being able to pick up your data from an empty field instead of climbing a roof or trekking through water makes atmospheric research more accessible.

Graphene Filters: This research was into the effectiveness of graphene-based filters for organic pollutants. What was surprising to me was how the graphene filters could be cheaper than activated carbon filters in the long term, since they are used up much slower.

Monte Carlo N Particle Semiconductor Detector Simulations: I don’t really have the background needed to understand the chemistry/physics behind this one, but this project is evaluating alternative materials for detecting radiation since the currently used ones are expensive and hard to get. The software used came from an Oak Ridge National Lab and required the project to justify its need to the federal government. It was a really impressive simulation with a clear market need and good results.

Datamining to find Cyberattack Trends: This was a study into a cybersecurity attack database from a federal law enforcement agency. Things such as SQL injection and buffer overflows stayed generally constant with occasional spikes on major vulnerabilities. However, there were large shifts to more focused attacks on edge devices since those provide the highest ROI.

Machine Learning for finding Malicious URLs: Due to the short lifetime of malicious URLs, they are purchased in large quantities. Because of this most are using extremely repetitive and predictable structures. Machine learning can effectively classify these URLs. This can be combined with other methods to further increase accuracy.

Grip Strength Among Sonographers: Sonographers are at a massive risk for repetitive strain injury. Increased grip strength can prevent this, but sonographers already have twice that of the average persons. By instead focusing on training related muscles that aren’t regularly stressed further gains can be made to reduce the risk of injury. On a side note, sonographers would make excellent rock climbers.

Pesticides on Spiders: This was a study into how pesticides impact non-target insects, specifically wolf spiders. Many chemical treatments are marketed as having no effects on other species. This research demonstrated them as causing clear damage even at doses far below what is commonly used.

This was the day when I presented my research:

It went well! A lot more people showed up than the last time I presented. The nice thing was that no matter a person’s background I was able to find a relatable use-case for my system.

Following the final two poster sessions, the conference ended with another plenary session, this time with a keynote on Lockheed Martin Skunk Works. It covered everything from the U-2 and SR-71 all the way to aircraft of the coming decades (Including possible commercial supersonic flight!). The presentation, along with the others, had a focus on the importance of engineering in other fields.

NCUR does a really good job at promoting a diverse set of research from all across the US. And, despite being the only student going from OSU, Ohio was certainly not lacking in representation. No matter where I went there was always someone from Miami, C-State, or Capitol nearby.

But, regardless of where people came from everyone had the same passion for their research and enthusiasm to learn about the work of others.

In addition to a list of projects to follow up on, I left this conference with a better understanding of what goes into research and its greater impact on the world.